© 2018 UB Campus Dining & Shops
This was a huge project I took part in. UB CDS’s Marketing department planned a Clue themed dinner party at Crossroads Culinary Center (C3), the dining hall in Ellicott Complex on UB’s North Campus.
I got to utilize my repertoire of skills in all areas of this event, since Marketing was handling all the planning, decoration directing and of course print items. I made a variety of videos, digital signage, green screen graphics, and even was an actor in the event, playing the role of Miss Scarlet.


The teaser I made before we released any major information for the event. I had to teach myself masks in Premiere Pro and it was incredibly frustrating but it came out really cool. This was put on all the digital advertising signs I put content on until I made an ad based on Marketing’s poster. I won’t share that since it essentially was Marketing’s design, I just resized it. 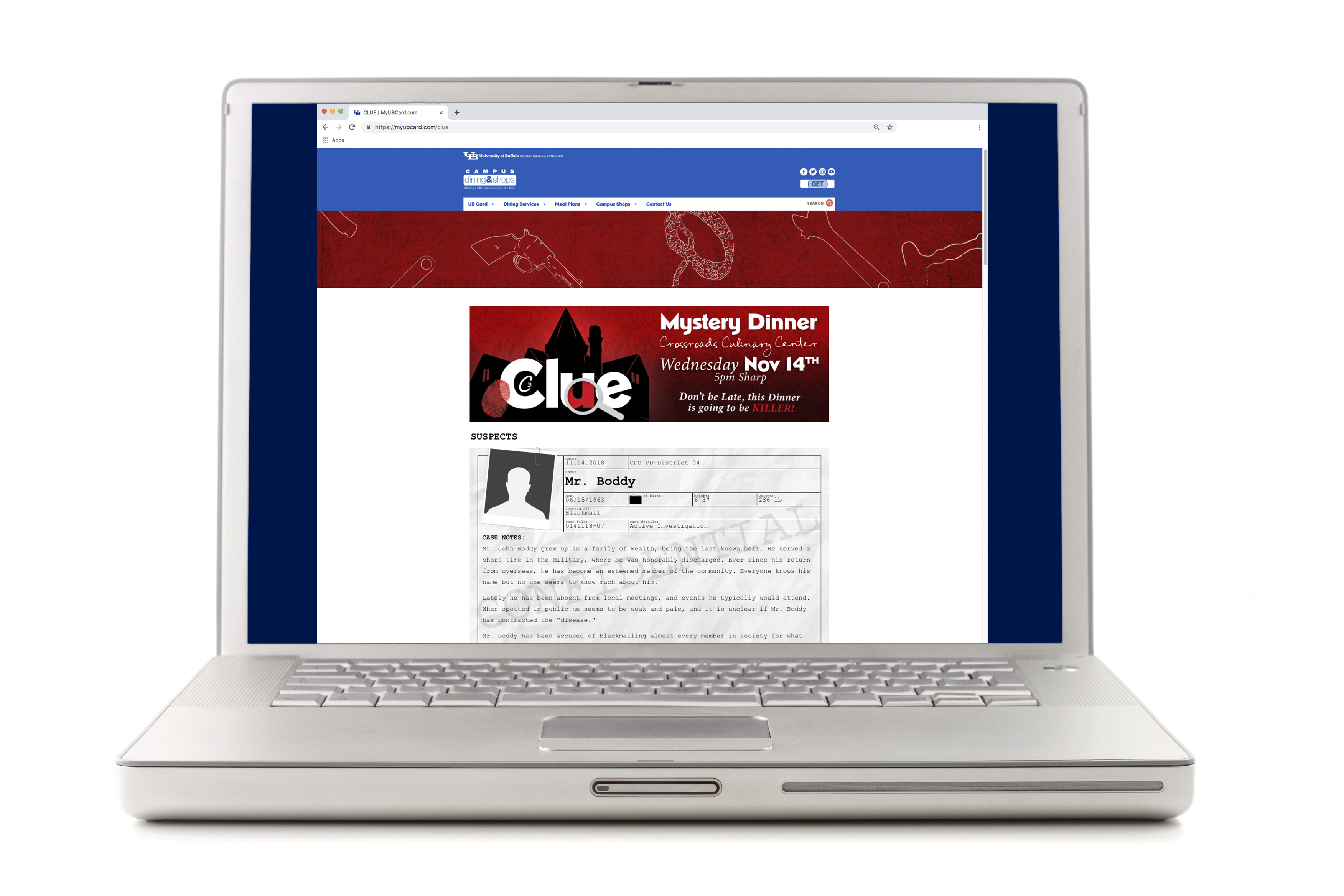 A snippet of the Clue dinner suspect page on our website (myubcard) that I created with the help of our devs. See below for the suspects.

Suspect list. Marketing made print versions of these for the actual event booklet, and we had to translate them to HTML and CSS. I made all the graphics and picked the colors and fonts, and the devs helped me make it look nice and responsive!

Marketing made a door hanger to put on dorm door handles in Ellicott, and on it was a QR code that led to a webpage I created featuring this hint graphic that I made. It basically was an incentive to tell more students about the event that don’t go on our website often. 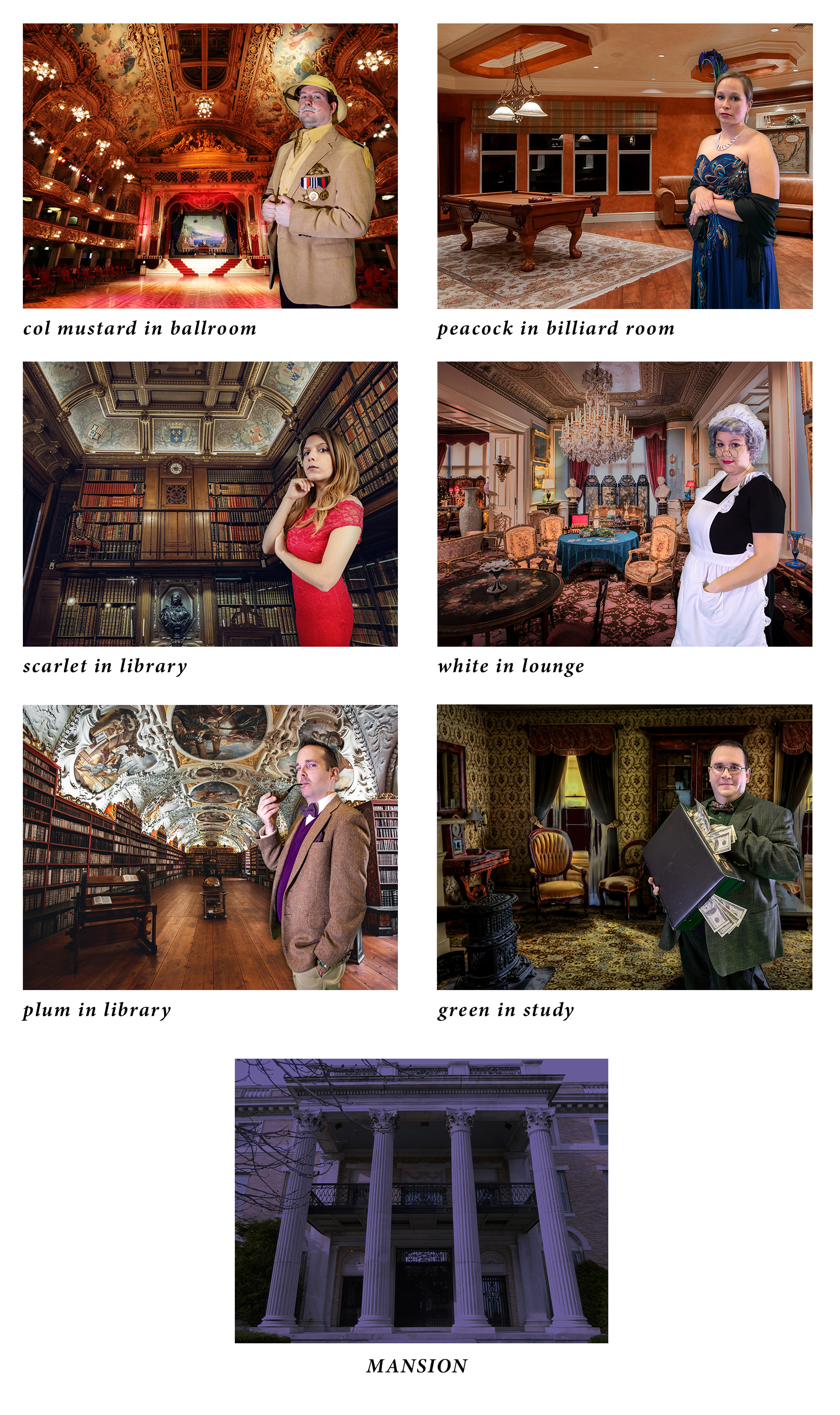 My background proofs for the green screen my department set up for the event. I did photoshoots with each actor/actress (and obviously had one of myself – Scarlet in the Library), isolated the actor/actress and then placed them on backgrounds we got on our StoryBlocks license or from PixaBay. The Mansion graphic is actually a photo my boss took of the Butler Mansion downtown, which my company’s catering department often uses for events. 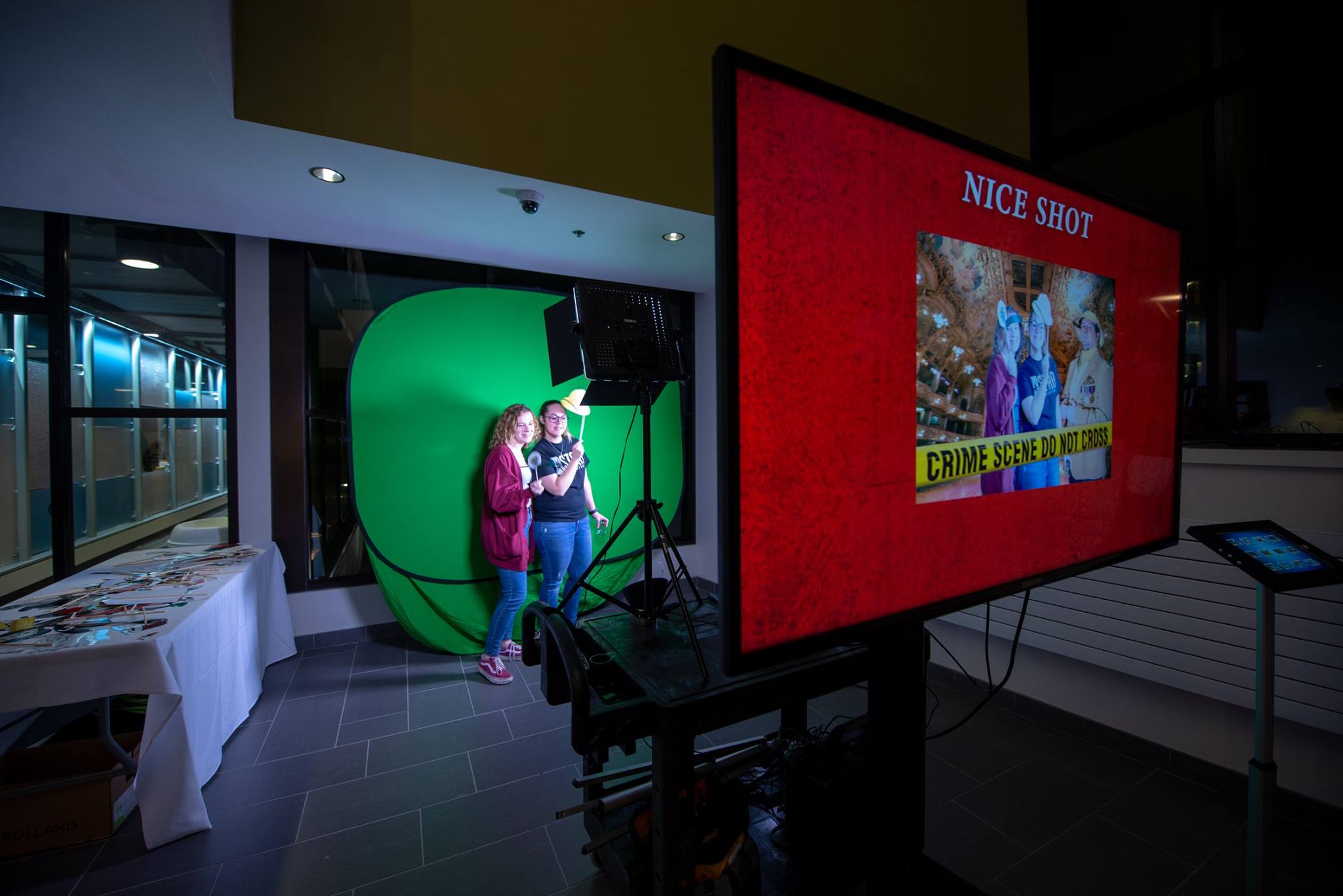 A photo of the green screen being used 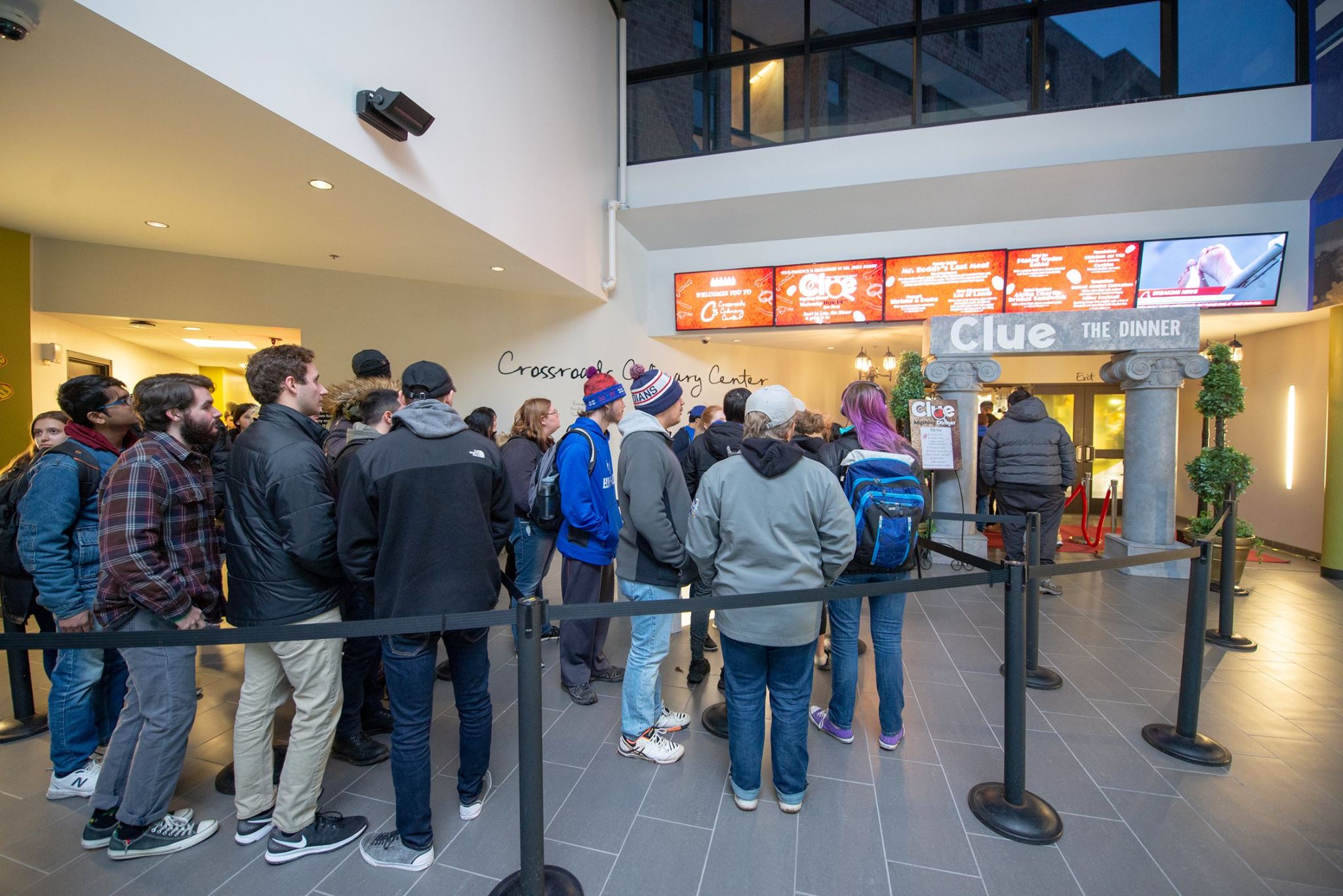 Photo of my lobby digital signage. The fifth/right most TV features my Breaking News video that started right after we had “Mr Boddy” (it was a mannequin body that we covered) rolled out on a stretcher by UB police. I heard kids were really intrigued by the whole thing and got excited to go in (like a haunted house type deal), since I was inside getting settled in my station for Miss Scarlet.


My Breaking News video. I also did the voice acting and distorted it so I sounded way older. All moving footage came from our StoryBlocks license, and the mansion photo like I said before was taken by my boss and I altered it to look like nighttime (and I added the subtle rain).


Marketing also had me make a Killer Reveal video for social media. Again, I did the voice acting myself and distortion. I made the silly graphic of our Professor Plum actor too. We didn’t want the other actors to know he was the culprit, so he came early to our photoshoot to take that photo with the mugshot sign. 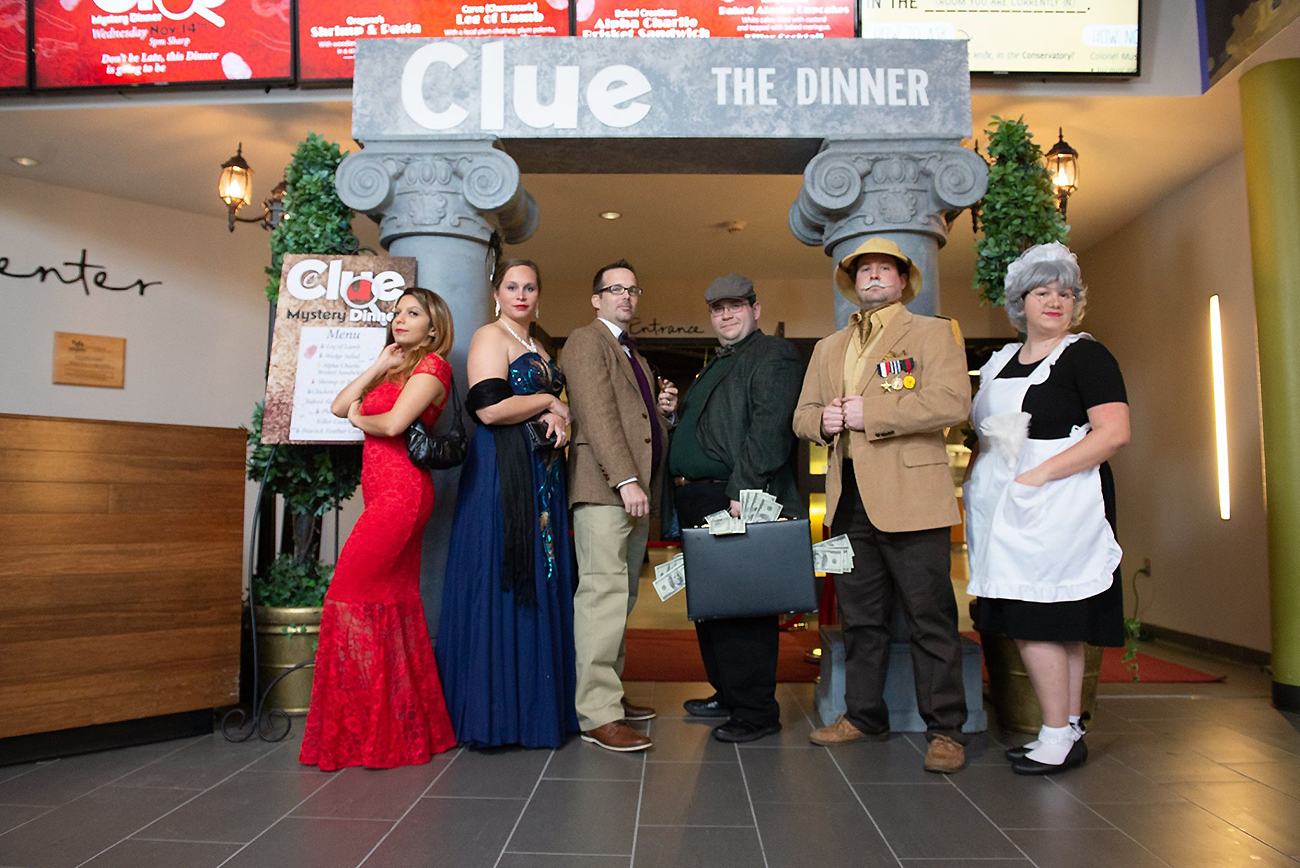 A group photo taken of all of us actors! Photo taken by Onion Studio. 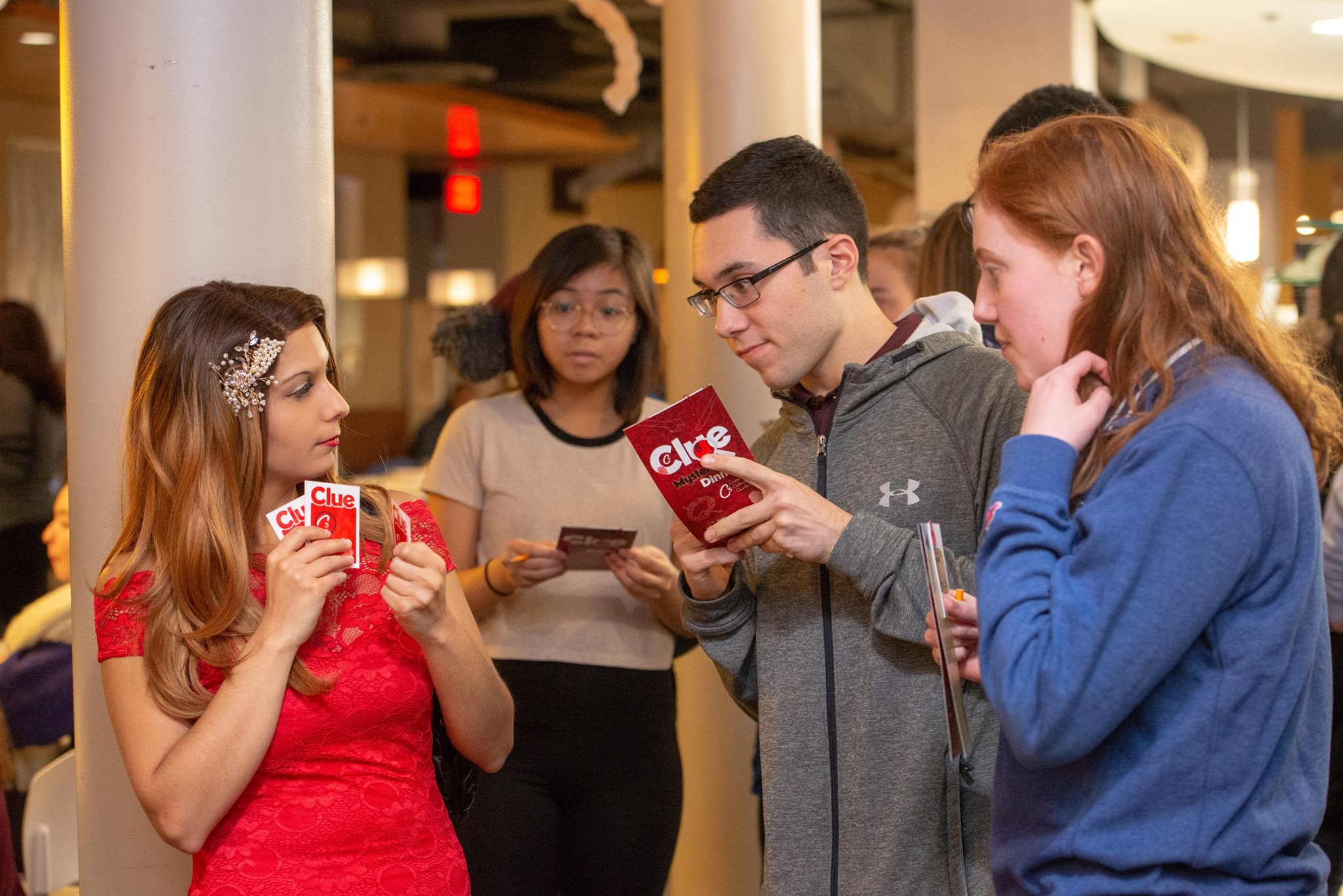 Photo of me interacting with students and their game inquiries also taken by Onion Studio. 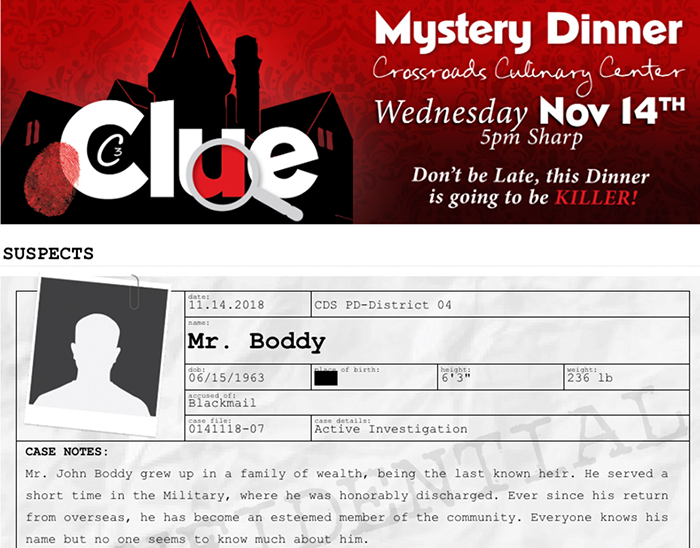